We were pleased to collaborate with colleagues in the UK, India, Germany, and Spain on this brief communication reporting three additional families with congenital myasthenic syndrome (CMS) all harbouring the same homozygous missense variant in SLC25A1, confirming this as a CMS-associated gene. Interestingly the patients  with more severe mutations also demonstrated mitochondrial abnormalities, while the milder mutations affected primarily the neuromuscular junction. Unlike typical mitochondrial disease the muscle weakness was non-progressive. However, the mitochondrial changes could provide an explanation for the pre-synaptic nature of this CMS-causing variant.

Congenital myasthenic syndromes (CMS) are a clinically and genetically heterogeneous group of disorders caused by mutations which lead to impaired neuromuscular transmission. SLC25A1 encodes a mitochondrial citrate carrier, associated mainly with the severe neurometabolic disease combined D-2- and L-2-hydroxyglutaric aciduria (D/L-2-HGA).We previously reported a single family with a homozygous missense variant in SLC25A1 with a phenotype restricted to relatively mild CMS with intellectual disability, but to date no additional cases of this CMS subtype had been reported. Here, we performed whole exome sequencing (WES) in three additional and unrelated families presenting with CMS and mild intellectual disability to identify the underlying causative gene. The WES analysis revealed the presence of a homozygous c.740G>A; p.(Arg247Gln) missense SLC25A1 variant, the same SLC25A1 variant as identified in the original family with this phenotype. Electron microscopy of muscle from two cases revealed enlarged and accumulated mitochondria. Haplotype analysis performed in two unrelated families suggested that this variant is a result of recurrent mutation and not a founder effect. This suggests that p. (Arg247Gln) is associated with a relatively mild CMS phenotype with subtle mitochondrial abnormalities, while other variants in this gene cause more severe neurometabolic disease. In conclusion, the p.(Arg247Gln) SLC25A1 variant should be considered in patients presenting with a presynaptic CMS phenotype, particularly with accompanying intellectual disability. 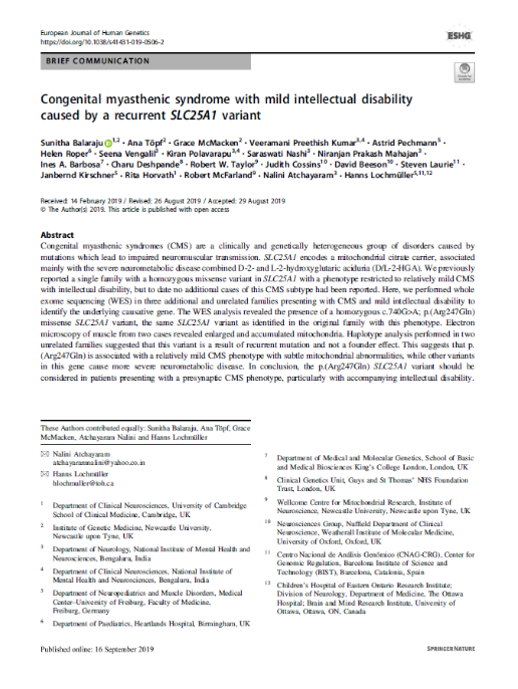 In rare diseases like the congenital myasthenic syndromes and other disorders of neuromuscular transmission, research results are frequently the result of international collaboration. Patients may...

The Lochmüller Lab on Lockdown

While the pandemic is still not over in Canada, and Ontario’s state of emergency will not be lifted before the end of June at the...